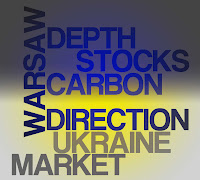 Greetings from Kiev!  Here is this morning’s Ukrainian stock performance summary, from the Warsaw Stock Exchange, based on the prior trading day's closing bell.  As a whole, the Warsaw Stock Exchange closed flat on the day (+0.08%), generally similar to green screens in the European markets (FTSE +0.79%, STOXX +0.73%, CAC +0.87%, DAX +0.70%, IBEX +0.24%) and the U.S. markets (DOW +1.02%, S&P +0.79%, NASDAQ +0.41%).  Looking at Ukrainian equities in particular across the Warsaw Stock Exchange, they performed slightly below the main Warsaw equities index, closing down (-0.92%) for the day with gains in Agroton and Westa unable to offset white and red screens across the rest of the Ukrainian names.  From a market depth standpoint, the highest trading volumes occurred in Westa International Scientific Group (273,563 shares), Kernel (103,146 shares) and Sadovaya Group (40,030 shares).

ICE daily CER price continued its support and improved slightly to 1.13 EURO (+3.67%).  The market remains significantly long.  The carbon market seems to be trading around pre-Doha uncertainty at this point.  If things go the same way as this time last year, one can expect positive initial headlines out of Doha meetings about the future of the Kyoto Protocol... causing prices to improve... followed by the inevitable realization that the headlines are only headlines without real substance... causing carbon prices to keep falling towards year end.  It is possible that Obama's victory on 6 November could open new opportunities for international carbon market penetration into America, however if this happened it probably would not enter the national dialogue until 2013 at earliest, and it's only speculation at this stage.
Posted by Jon Mckee Queen at 9:51 AM 1 comments