In a move perhaps motivated in part by the desire to raise pre-January election funds for the government, Ukraine’s Cabinet of Ministers has recently taken steps to open the way for near term privatization and auctioning of 15 regional power distribution companies (“oblenergos”). See Cabinet Resolution Number 894-р of July 29, 2009.

Specifically, Prime Minister Yulia Tymoshenko has instructed the Ministry of Fuel and Energy to transfer controlling stakes in these state owned oblenergos from the National Energy Company to the State Property Fund – which thereby opens the way for subsequent privatization through auctions.

So far there has been no positive or negative feedback from President Viktor Yushchenko on this recent Cabinet Resolution. Earlier in the year President Yushchenko had attempted block a similar resolution allowing privatization of the state owned power generating companies Dniproenergo, Donbasenergo, Zakhidenergo and Centrenergo – only to have his decree overruled by Ukraine’s Constitutional Court on April 30, 2009.

If there is no blocking attempt by the President then controlling shares of the 15 oblenergos in the table below could be set for auction before year end. The government has specified controlling share amounts for auctioning in order to maximize potential investor interest. However, market analysts nonetheless have expressed no estimation about whether these shares actually can or will be purchased by investors prior to the Presidential elections in 2010. 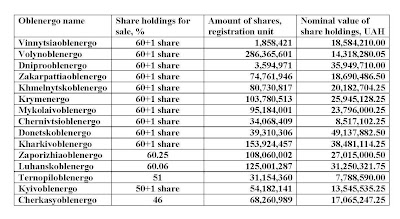 Regardless of its timing, the further privatization Ukraine’s aging and outdated energy infrastructure is a positive and important step for Ukraine. Ukraine has roughly one third the energy efficiency of its European neighbors, and it even trails Russia in this regard. Privatizing the regional power distribution companies and raising them to market efficiency will benefit Ukraine’s commercial and private sectors, and it can also pave the way for the country’s future ability to become an energy exporter.

I will continue to monitor these developments and provide updates as they occur.
Posted by Jon Mckee Queen at 1:12 PM