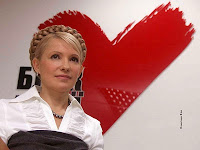 Yesterday was another roller coaster day in Ukrainian politics, and it was a difficult day for Ukraine's former Prime Minister Yulia Tymoshenko. Despite her best political maneuvering efforts, she lost a no confidence vote in Parliament.  As a result she has been dismissed from her post and is reported to be heading off on an indefinite vacation.

This is not the death knell for Ms. Tymoshenko's political future by any extent, she will remain a powerful figure in local politics... for one thing, national campaigning is a highly expensive competitive sport in Ukraine; there is only a small set of rich players who can afford the game. One only needs to look at the current President Victor Yanukovych's 5 year career arc to see how a resurrection theoretically could be possible.

A charismatic, photogenic and highly recognizable international personality, most of the former Prime Minister's popularity problems at home stem from serious perceived shortcomings in her economic policies and business sector leadership. Case in point: after the announcement of her dismissal, almost all Ukrainian stocks responded with positive gains on the day (http://ux.com.ua/en), while international economists and analysts widely predicted positive outlooks on her country's debt and default risk profiles.

If Ms. Tymoshenko plans to try for a Yanukovych-style comeback in future years, she could do well to listen to her economic and business critics, and learn from this experience to build a more functional business platform into her political agenda. Charismatic speeches and being a a popular personality are great assets for a politician, and they can make someone a media darling overseas, but among the home town voters the economy needs to work too. One cannot ignore this core fact and focus primarily on witty soundbites and biting criticisms of one's opponents, looking the part and talking rhetoric -- a country of Ukraine's size and importance requires effective top-down leadership and a working economy.

If President Yanukovych and the coalition in power achieve large economic improvements during her absence, Ms. Tymoshenko may face an uphill battle back into power. She will need to convince future voters and financial contributors that the next version of "Yulia" is a better business prospect... not a step backwards to her crisis enhancing populism of 2007-2009.

The Wall Street Journal had the following to say about Ms. Tymoshenko's dismissal, in an article entitled "Ukraine Debt Risk Falls As Tymoshenko Loses Vote" published shortly after the no confidence vote occured (below).  Best regards -- Jon

The cost of insuring Ukrainian sovereign debt against default for five years fell to the lowest level since October 2008. Credit-default swaps with five-year protection fell 55 basis points to 834 basis points, showing that "investors think Ukraine is much less risky now," said Tatyana Chub, a trader at BG Capital in Kiev.

Following the no-confidence vote and the collapse of the ruling coalition Tuesday, Yanukovych's allies in parliament can now begin the process of creating a new government with the goal of renewing a $16.4 billion lending program from the International Monetary Fund, which would help repay $6 billion in debt due this year.

"The collapse of Ukraine's government earlier today may paradoxically be a positive development, but a lot of progress still needs to be made before access to IMF funding is unfrozen," Capital Economics said. "While it is possible that the government can scrape through this year without external financing, Ukraine will remain particularly vulnerable to swings in global investor risk appetite for some time to come," it added.

Ukraine needs political stability to help revive the economy after a 15% drop in gross domestic product last year.
Posted by Jon Mckee Queen at 10:35 AM