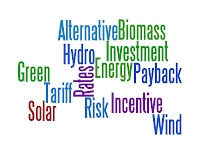 On June 18, Japan's Ministry of Industry approved the implementation of renewable energy feed-in tariffs.  These tariffs, set to last for at least 20 years, are among the highest in the world (see chart below) and they become effective from July onwards. Bloomberg New Energy Finance estimates that Japan's photovoltaic (PV) market alone could be worth at least 10 billion USD, with Japan poised to overtake Italy as the world's second largest solar energy market.

The new Japanese green tariffs require utility companies to purchase electricity from renewable sources, such as wind, solar, biomass, geothermal and different forms of biomass.  Japan's government views this requirement as a positive step towards reducing its historic reliance on nuclear power and thereby mitigate against a potential future "nature+nuclear" national catastrophe a la Fukushima.

Japan only generates about 1% of its energy from renewable sources at present, but analysts predict that the country should unlock at least 30 billion USD in fresh renewable energy investment by means of these new tariffs. It will be interesting to watch how feed-in tariff policies evolve in the USA and other major economies -- much work still needs to be done in order to reduce our global dependence on greenhouse gas emitting fossil fuels.